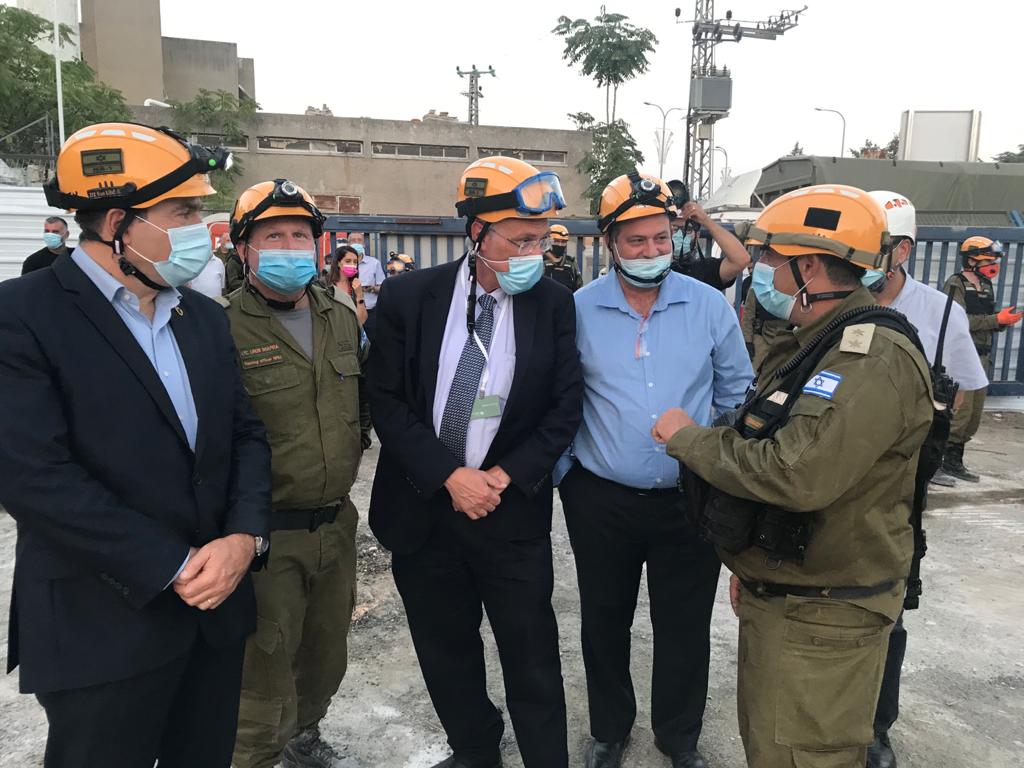 There was a lot of excitement and activity at the Azrieli Faculty of Medicine on Monday September 7, 2020. Having received the green light to purchase the land rights where an old Bezeq (Israeli telephone company) building was situated, a block from the current Azrieli campus, a creative idea surfaced, brainchild of the administrative head, Mr. Noam David Reshelbach: Optimize the opportunity for a search and rescue (SAR) drill, following the destruction of the current building, and before the erection of the new BIU edifice.

A week earlier, the Bezeq building was carefully demolished by contractors hired by BIU, while under the supervision of Mr. Gadi Buganim, head of the BIU Operations Division Construction Department. But before the 1200 square meter building sitting on a 2000 square meter lot was wrecked, human “dummies” with pre-defined injuries and medical histories were carefully placed throughout the site, in anticipation of the drill to take place. Come September 7, the Israeli National Search and Rescue Unit of the IDF Home Front Command, accompanied by BIU and Municipality of Safed representatives, Magen David Adom, the Israeli Police, the IDF Canine Unit, ZAKA, and some 100 reservists (who were deliberately only alerted of the drill that morning!), commenced with a search and rescue exercise that would continue for the next three days. Drills of this nature are essential for the unit, so the opportunity was warmly welcomed. The Faculty extended its hospitality by opening its doors to the IDF, allowing it to use the existing campus as its base.

A lot was learned at the drill, which was designed to simulate a rocket attack or earthquake with massive ensuing destruction on an old age home. The reservists (from all professions and walks of life) were granted a perfect opportunity to practice “real time” a new branch of emergency medicine, called Disaster Medicine, which focuses on the unique issues involved in search and rescue. All ages can be affected, and injuries on all major organs can ensue. Imagine these scenarios: how does one administer an IV in the dark, under dusty conditions, to a trapped victim? How does one quickly and safely amputate a destroyed limb under these conditions, if there is no other way to save someone trapped in a building about to collapse? What happens to the human body when a heavy object is lifted after days of being trapped (potassium and myoglobin can build up in the cells and suddenly cause fatal arrhythmia or kidney failure once blood flow is resumed, even on the way to safety, termed Crush Syndrome).

Prof. Dan Nemet, a professor of pediatrics at the Sackler School of Medicine and a specialist in pediatrics and sports medicine, who was Physician in Chief of the Israeli National Search and Rescue unit, and in charge of medical training for the drill added: “What is unique about this type of drill is that three factors must be considered at the same time: the medical situation, the physical structure or the engineering aspect, and the danger to the rescued and the team. It is called Urban Search and Rescue Medicine. Unfortunately, Israel has a lot of experience in this field, from the Tyre headquarters bombings in Tyre, Lebanon in the 1980s and then worldwide when we were called to action due to our expertise. Our unit is a member of the United Nations’ International Search and Rescue Advisory Group (UNSARAG). We also make use of search dogs, and need to know basic veterinary medicine – a specialty called K9 Medicine. We are very grateful to the Azrieli Faculty for thinking of this wonderful educational training opportunity and for offering us the opportunity to experience it and for setting up the realistic scene. This is very unfortunately so needed in today’s reality.”

It would appear that this is only the beginning of an exciting and budding relationship between the IDF Home Front Command and the Azrieli Faculty of Medicine. One of the suggestions following the successful drill was to together design and develop an international course in Disaster Medicine.

The new building, once built, will house the Azrieli Faculty’s Education Facility.

For more pictures, go here (credit to Or Kachlon).