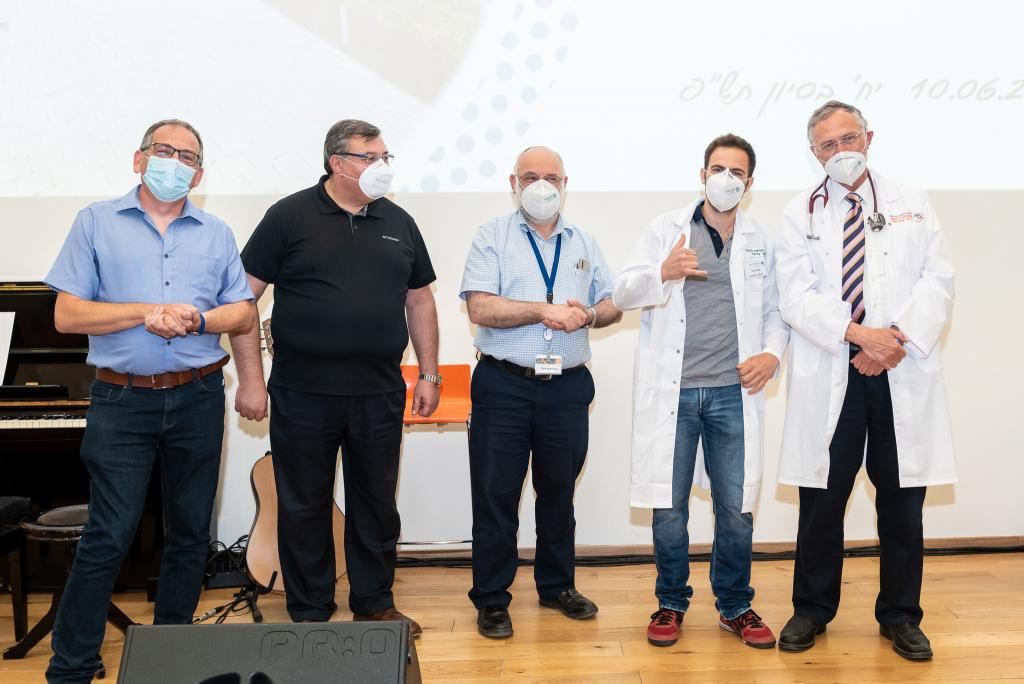 Another class of four-year-track students (those who entered medical school after successful completion of a BA/BS degree) convened on June 10, 2020 to receive their white coats in the legendary White Coat Ceremony. With Covid-19 looming, the exact venue was uncertain until the last moment, as previous recent ceremonies had been held via Zoom, and original plans were to congregate outside, in the Faculty parking lot. Alas, with two days planning, thanks to the dedicated and organized efforts of the administrative staff, the ceremony ultimately took place in the Esther & Haim Carasso Auditorium. Administration, course coordinators, and instructors were present in the Auditorium while students remained in classrooms in groups until called, and some 300 family and friends viewed via Live YouTube.

This was the eighth Azrieli medical school class, over 70 students. After two years of pre-clinical studies at the faculty, the students will now enter the clinical phase of their studies, in regional hospitals and clinics.

Emceed by Noam Reshelbach, the administrative head of the Faculty, Dean Carl Skorecki opened with a humorous, timely speech, reminding the viewers of the history of medical training - and even dressing up as a doctor from the distant past, during previous epidemics. He likened the beak mask of past to the current surgical mask, and the burning of incense to Alcogel! Prof. Skorecki then stressed over and over again, the importance of human contact between physician and patient, team work, honestly, active listening, and compassion.

Prof. Eric Shinwell, Associate Dean for Medical Education spoke next, explaining the transition from passive to active learning and the importance of active learning for internalization. He offered a tip: always find an interesting patient, because much can be learned from them. Utilize quiet "down time" for exploration and self-edification.

Prof. Daniel Glikman, Vice Dean, Pre-Clinical Studies, came to the podium next. He brought in a parallel to a rock group. Just as we rarely see, or are even aware of, all that is involved behind the scenes - we should never forget, and thank, the administrative staff who make it all possible. He then thanked everyone by name and expressed warmest appreciation to the educational staff, for giving the inspiration. In the end, he said, each student will develop their own style.

At this point each student, one by one, by class, was invited to the stage to receive their White Coats and pose for a photograph with those who made it possible. It was pointed out that at the next ceremony they will be called "Doctor."

A video greeting sent by two instructors currently in Holland (Dr. Karin Prins and Dr. Michael DeVries) was viewed next.

A lovely musical interlude by four students followed, then the presentation of certificates for scholarships of excellence of the Edwina and Paul Heller Memorial Fund and the Dr. Helena Rosenkranz Fund.

The podium was then turned over to two students, Noa Frishman Marciano and Amirit Luder, who carried the evening onwards. They started with a fifteen minute video comprised of memorable moments shared by the students. Then a parent spoke via video to the crowd, the student choir performed, gifts of appreciation were given to staff, and the student representative Avinoam Nahshon shared a few words. The two-hour ceremony concluded with the singing of the national anthem, Hatikvah (and much excitement!).